Imagine yourself standing in front of a blank canvas pondering what to paint. Any artist can explain how intimidating that empty white rectangle can be. Now imagine that the blank canvas measures 90,000 square feet or is 200 feet up in the air. If you can do so you have an idea of the kind of pressure muralist Eric Henn faces when painting. With over 35 years of experience, Eric Henn's talent is a natural one, with no formal education. He works alone & competes against mural companies compromising teams of artists. Eric's artistic career began with painting surfboards & motorcycles in Virginia Beach. Since then the scale of his work has grown to include realistic large scale murals across the world. Henn has scaled great heights that would stop any acrophobic. He has hung over aquarium pools with sharks below. His artwork is seen by millions, most often from driving down the road behind your steering wheel on a water tower. He has become a master at transforming eyesore structures into life-like works of art. Eric’s canvas consists of buildings, water towers, theme parks, industrial tanks & many other landmarks. His realistic large scale murals have landed him, “Artist of the Year,” “Muralist of the Year,” “Tank of the Year” & many more awards. Millions of gallons of paint, hundred of thousands of brushes & a multitude of colors are a normal list of items to complete some of his super murals done internationally from Los Angeles to Australia. 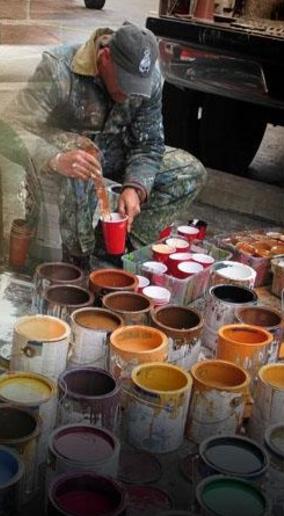